A beautiful scene appropriately captured yesterday on Christmas Eve. The sun was lighting up the plains and farm beautifully. In the background, the snow covered Rocky Mountains with Mount Meeker dominating. Above that, clouds shrouded some of the mountaintops while a wave cloud was above. I wish you all a very Merry Christmas and Happy Holidays. May you and yours enjoy all of the blessings that our Lord was given unto us for on this day.

I recently came across a spot with a bunch of old farm equipment and it seemed like it would make for a fun, different photo session. All of the gear was well-rusted, clearly past its prime and sitting in the elements for quite a while. Conversions to sepia and black and white seemed to be appropriate for many of the images. Not my usual photo fare but kind of fun to do. Definitely reminded me of my grandpa’s farm in north-central Kansas and the many days as a kid I spent there.

I have been visiting this local open space for years. The old farm was bought by the City of Thornton and it is now a nice little retreat in the middle of suburbia. I have always said I needed to photograph it at sunrise and this past Sunday I finally did.

As you can see, it was well worth it. Mother Nature put on a beautiful show in the sky and the changing of the seasons colored the trees and bushes in hues of yellow and orange. That barn looked pretty cool and the meandering creek just adds to the image.

I have been reminded that while this image appeared in my “top shot” landscapes video at the end of the year, I never shared the image itself. So… Here you go. 😉

Taken at the end of June last year in Logan County, Colorado. My family and I were camping at a state park on the northeastern plains and as usual, I headed out for a morning photo drive while they got their beauty sleep.

I was planning to be in this spot right as the sun popped over the horizon but on the way got distracted by critters (as usual). It all worked out well though as when I did arrive, the sun was just above distant clouds and its golden light bathed everything in gold. Above, popcorn-like clouds with some of that beautiful Colorado blue.

I always say, the plains of Colorado offer up the best sunrises and sunsets in the state – and this is just another example.

Kind of a cool, early morning scene from a few weeks ago. I wanted to do some astrophotography so was looking for a spot with a cool foreground and this old house in Logan County, Colorado fit the bill.

The problem was that there was only a brief, early morning window between the moon setting and the sun rising plus the city of Sterling was on the horizon. Nevertheless, the shot came out pretty well.

In addition to the view of our galaxy’s core are the four very bright “stars” that are seen. They really are noticeable but, not being much into astronomy, I had no idea what they were so I looked it up.

The brightest one to the bottom left is in fact Jupiter. Just above and to the left is Saturn. Moving above and to the right, the bright star there is Altair, the 12th brightest star in our sky whose name comes from the Arabic phrase, “the flying eagle.” Moving to the blue one further to the top right is the star Vega, also called “the swooping eagle.” Kind of fun and interesting I think, particularly given my fascination with eagles.  😉

I have driven by this spot dozens of times and I always say I should stop and take pictures. Sunday I finally did.

The sun was just starting to illuminate the landscape and really made the red barn pop. In the background, the snow-covered Mount Meeker and Longs Peak stood proud and looked beautiful.

The barn is actually part of the Boulder County Government’s Agricultural Heritage Center. You can learn more about it here.

One of the Moulton Family barns in this historic location first settled in the late 19th century.  Pretty rugged country and the winters had to be absolutely brutal for early settlers.  Feel free to share.  (Read more here) 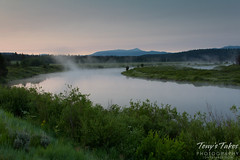 Whisps of fog rise from the Snake River 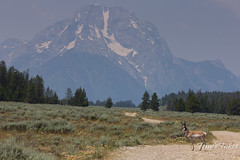 A pronghorn crosses the road with Mount Moran in the background 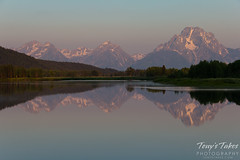 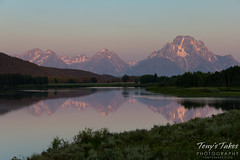 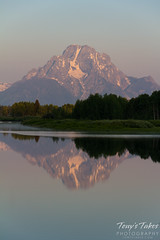 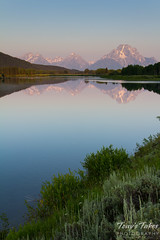 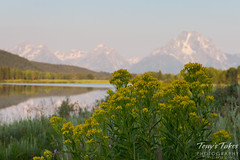 Wildflowers in the foreground with the Tetons in the background 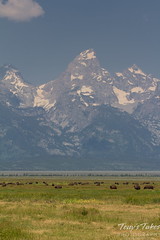 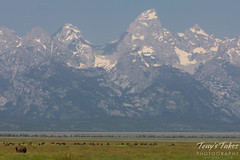 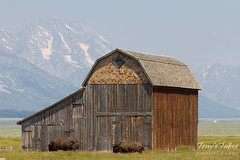 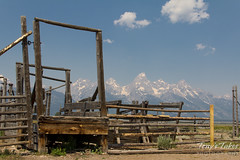 The remnants of a Mormon settlement in Grand Teton National Park 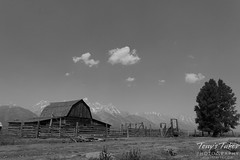 Unseasonably warm temperatures on this early spring evening made for a prime opportunity to get out and take some pictures.  I actually came to this location to get images of great blue heron’s nearby but got there a bit late and the lighting was horrible.  Instead I turned my gaze to the west.  This taken at Metzger Farm in Westminster, Colorado.

Visiting an old farm in Boulder, Colorado today for photos but actually I wasn’t to be the photographer.  Instead, the family was having their pictures taken.  Nevertheless, I had to bring my camera and snap a few shots.

Old farms remind me very much of my grandparents’ farm and I love taking pictures of them.  The gnarled textures and bright but worn colors make great subjects.  As a bonus there were some nice looking lenticular clouds on the way back.

Photos © Tony’s Takes. Images are available for purchase as a print or for digital use. Please don’t steal, my prices aren’t particularly expensive. For more information contact me here.

Suburbia has replaced the rolling farmland that used to occupy the Thornton and Eastlake area and the agricultural heritage of the area is now lost.  One notable reminder remains.

The Eastlake grain elevator sat in disrepair for many years.  This image was taken after a healthy pre-Christmas snow.

Photo © Tony’s Takes. Image is available for purchase as a print or for digital use. Please don’t steal, my prices aren’t particularly expensive. For more information contact me here.