I hadn’t seen my golden-maned buddy the last few times I was in the area so I was happy he decided to show today. Unfortunately his chosen perch was a good ways away and with temperatures in the single digits, he was in no rush go anywhere.

I spent a half hour with him waiting for him to do something, then left for an hour, came back, and he was still in the same spot. After another half hour I gave up but it was really cool to see him again.

More of my pics of these massive raptors can be found here.

Such an absolutely stunning raptor! I’ve been quite close to a Golden in the wild before and their size is something that is hard to appreciate if you haven’t been near one. However, this past weekend I took part in an event that let me get within just a few feet of one and, well, wow!

A local wildlife photographer group arranged for a visit with Nature’s Educators, a non-profit group that does public outreach events to educate the public on wildlife. Most of the animals in the group’s care cannot be released into the wild for a variety of reasons. Such is the case with Tempest.

This 34-year-old eagle was illegally taken from her nest as a hatching by someone who thought she would make a good pet. That of course did not work out and due to it having been ‘imprinted’ by humans, she could not be released into the wild. To say she is stunning would be an understatement.

The event gave me an opportunity to try out my latest lens, a Tamron SP 70-200mm F/2.8 G2 and as you can see, the results were quite impressive! The lens captured the extraordinary detail of this bird and opening it up to f2.8 really helped blow out the background and ensure it wasn’t a distraction.

I found this good friend of mine in one of its favorite spots in the Colorado foothills this past weekend. It spent more than an hour sitting, waiting and observing but finally it started to get anxious and then took off like a bat out of hell. It flew at mach one down the hill (this image), across the highway and hit the ground hard and fast attacking a prairie dog. That final action was too far away to get pics of and, unfortunately for the eagle, it missed on its strike. Nevertheless, it was an impressive display.

It has been a while since I have seen my friend – in fact it has been since early spring. I was thinking about her this morning and hoping that she reappears soon. On this particular day back in April, she put on a nice little show for me. There were plenty of flight shots but she also took a break on one of her favorite overlooks, a pole on a hillside, where she kept close watch on the goings on.

If you’ve never seen a golden, you are missing an extraordinary treat. They are clearly just gorgeous but more impressive is their sheer size.

Not the usual type of eagle I post on Fridays but this one is certainly worthy of sharing. Honestly, I can’t believe I have never shared it before now.

Taken back in March, this massive, gorgeous Golden Eagle was hanging out in one of its favorite spots in Colorado’s Front Range foothills. After giving me a great series of shots of it posing, it then launched into the air yielded a host of images as it took flight.

Have a great weekend, everyone and TGIF!

I have been very fortunate in that the last two weekends have delivered some extraordinary photo opportunities for me. That is a good thing because I had gone a few weeks with excursions that had been disappointing.

This absolutely gorgeous Golden Eagle helped turn the corner for me. I initially spotted it far off in a field in the Colorado Front Range foothills and moved on to see what else I could find. A friend called and let me know that the raptor had moved itself into a nice spot so I hurried back.

After spending some time photographing it in a tree, it gave me a nice flight series and relocated to this pole on a hillside. There is kept watch, seemingly looking for an opportunity to dine. Spotting something in the distance, it launched into the air, extending its legs and spreading those massive wings.

Seeing a Golden Eagle in any setting from any distance is pretty darned exciting given their relative rarity. Having one that is so comfortable with you that you can walk within 10 yards of it is a treat that few experience and so I count myself blessed to have had this encounter.

This juvenile was perched in a tree and, likely due to its relatively young age and inexperience, had decided being around humans wasn’t so bad. It allowed me to capture a huge number of pictures, all while it sat perched. I waited for an hour and it never did take flight, preferring just to relax and take in what was a gorgeous Colorado day.

This was the first time I have seen a juvenile Golden in person and it definitely had a different ‘look’ to it than an adult. Its overall plumage was quite mottled rather than the solid, dark brown color of an adult and its golden mane also displayed a variety of shades.

Scroll down to view the complete series. 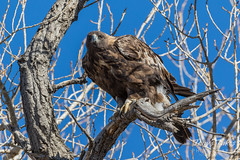 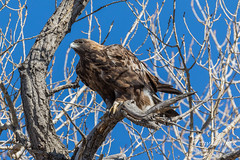 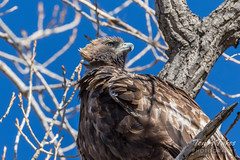 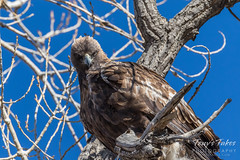 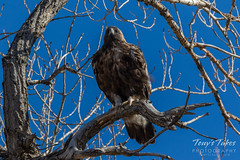 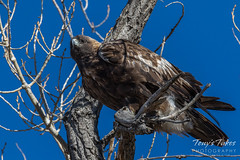 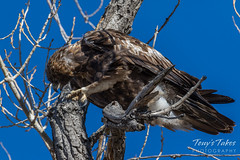 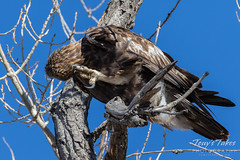 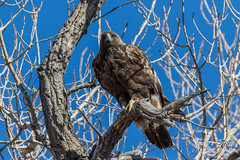 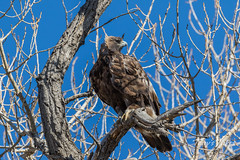 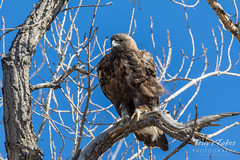 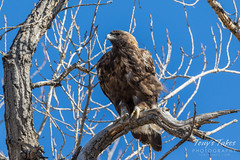 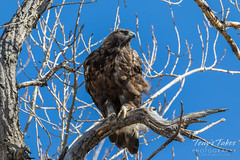 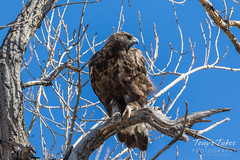 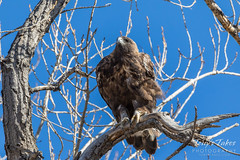 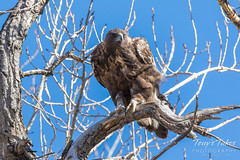 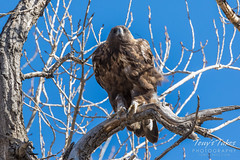 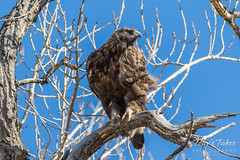 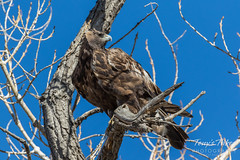 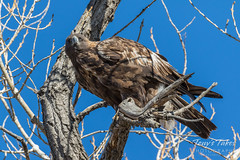 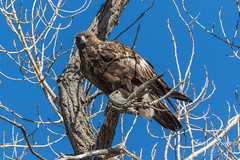 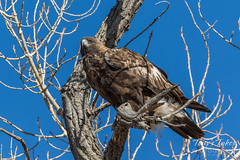 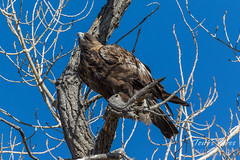 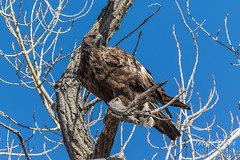 I of course normally post pics of the ‘bald’ variety of this type of bird to close out the workweek but today I make an exception. I came across this gorgeous raptor and I had an absolutely amazing encounter with it that I want to share.

Initially perched on a pole soon after sunrise, after a little while it launched right toward me giving me some nice flight shots, including this one as it crested the hill between us.

The look of determination on its face, the golden light, the dried grass below and the blue sky above make for a pretty cool capture. I wish it had waited till the sun was up a bit more as my gear struggles in dim light and that shows in the pics but I won’t complain (too much).

I was chatting with a fellow photographer the other day and he mentioned how he had yet to get pictures of a Golden Eagle. I in turn replied I had only seen them a few times but on one occasion did manage some nice captures. I showed them to him on my phone and it occurred to me that I previously shared only one pic of the series here. So…. Here is another.

This was taken on an absolutely bone-chillingly cold late December morning last year in Adams County, Colorado. The sun had only been up for a brief time and temperatures were in the single digits. My friend, Bill, initially spotted it and called me.

Meeting at the location, we opted to approach on foot, being very deliberate and only moving forward a few feet at a time. This worked well and the massive raptor gave us a number of fantastic poses and flight shots over the next half hour.

The one drawback was that we were miserably cold afterwards – I couldn’t hardly move my fingers and was shivering violently. I couldn’t get back to my truck fast enough! 😉

Sometimes luck and chance play the biggest part in a very cool wildlife encounter and that was the case with this one.

I was in Longmont, Colorado and on a whim went to an area west of the city. I was about to turn around when I spot a large, dark bird in a tree next to the road, initially dismissing it as ‘just a hawk.’ As I drove by, I glanced at it and upon seeing its golden mane and its large size, I knew it was certainly not a hawk.

Quickly making a U-turn I approached slowly and much to my delight, the eagle totally ignored me and continued to sit perched in the tree. Lighting was tough as it was backlit and there were strong shadows from the tree’s leaves and branches. When it did finally take off it went down the opposite side of the tree and landed way out in a field so there weren’t any opportunities for flight shots.

Nevertheless, it isn’t often you get a chance to get pictures of one of these magnificent raptors so I was happy as heck.