Spend any time on the Colorado plains and this is one bird you are certain to hear. They are very common and their song is quite unique and beautiful. This particular bird was perched on some grass, making its presence known to anyone or anything nearby. The morning light helped make for a cool capture as it sounded off.

These birds are very common in Colorado and their distinctive song is one heard often in the spring and summer. I normally don’t take pics of ‘little birds’ but the chubby little one’s bright yellow really stood out against the white of the frost and snow.

I thought my photo day was done and had pointed my truck for home. About halfway there, I see a flurry of activity on a utility pole ahead and slow to take a closer look. Much to my delight I find a Prairie Falcon that had just snagged a Western Meadowlark and was preparing to dine on it.

The falcon wasn’t particularly comfortable with me being there but was hungry enough to tolerate my presence. Prairie Falcons are not very big but just as ferocious as any raptor, preferring to dine on smaller birds, oftentimes diving right into flocks and snatching their prey.

Scroll down to view the complete gallery. 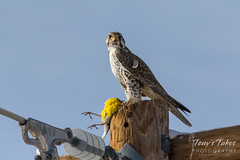 Prairie Falcon shows off its catch 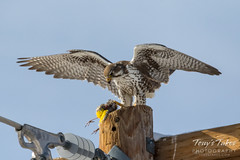 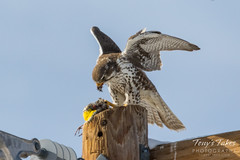 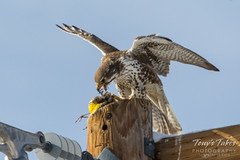 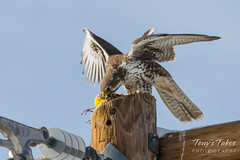 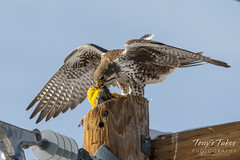 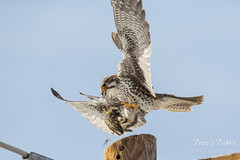 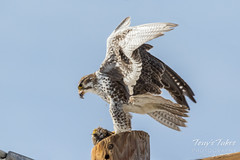 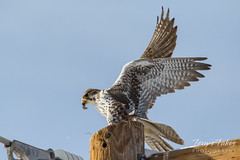 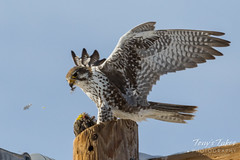 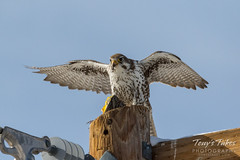 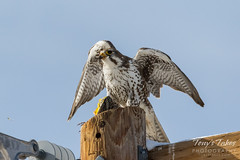 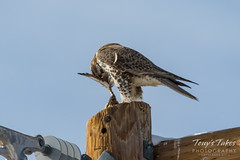 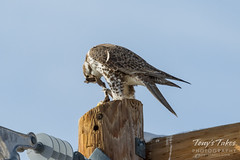 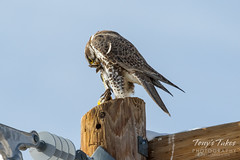 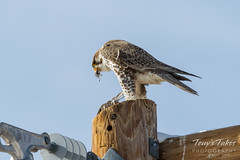 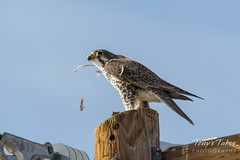 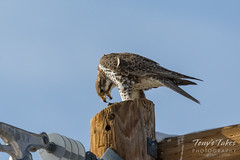 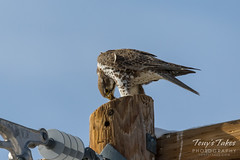 I don’t normally pay much attention to these raptors because they are quite common and generally I don’t find them particularly photogenic. However, because they are common, sometimes you can get them doing some pretty cool things.

Such was the case when I came across this one a couple of days ago. It was perched on a pole dining on what appeared to be a Western Meadowlark that it had caught.

I’ve seen Red-tails eat more terrestrial fare like prairie dogs, rabbits and snakes but this is the first time I have seen one eat another bird. After eating a bit and giving me a nasty stare, it decided it preferred someplace with more private dining accommodations and flew off.