You are here: Home / Wildlife / Golden Eagle takes a head on flight path

Sometimes you just have to trust your instincts. The day after Christmas I was out northeast of Denver looking for subjects. I spot this dark-colored raptor high on a utility pole and after glancing at it I say to myself, “Kind of looks like a Golden Eagle but it’s just a juvenile Bald Eagle.”

Given the poor lighting and distance I quickly move on. Later on I run into my friend, Bill, and we talk about the sighting, both agreeing it was a young Bald Eagle. A while later he calls me, “Tony, I think you need to come look at this eagle again. It may be a golden.”

Very skeptically I drive to the spot and through my lens I take a closer look. The eagle, which had insisted on facing straight forward before, turns its head. A golden mane!

Bill and I excitedly start snapping pictures as Golden Eagles are a rarity on the Colorado plains – this was in fact only the third I had seen in my life at that time.

After a while the golden decided it was time to move on and launched – straight at us! Sadly the lighting was horrible making for dull, colorless photos but the experience was grade A.

As luck would have it, the very next day Bill and I found what was likely the same bird under much better weather conditions – images which I shared last month. But, this day’s encounter served as a lesson learned – Be darn sure what you are looking at is what you think it is before you dismiss it. It could have very well been my only opportunity to get images of this gorgeous raptor.

Scroll down to view the complete gallery of our encounter with this beautiful raptor. 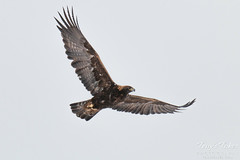 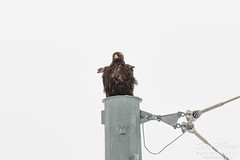 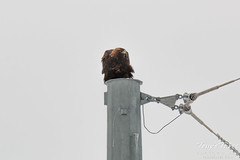 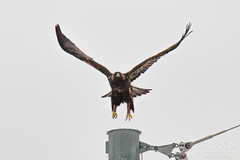 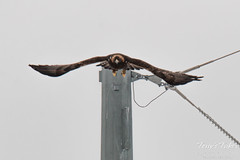 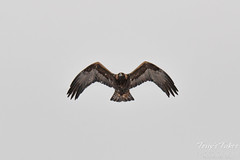 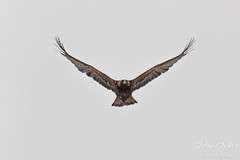 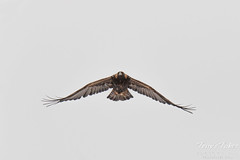 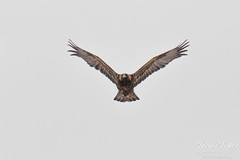 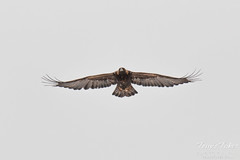 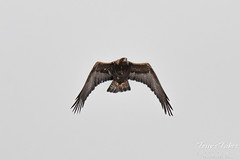 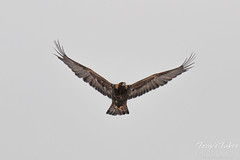 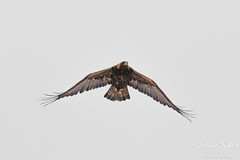 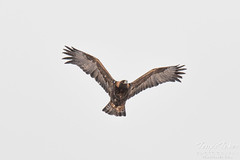 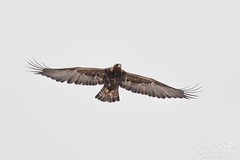 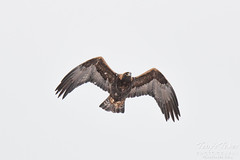 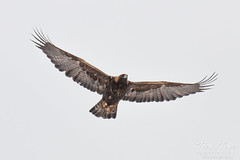 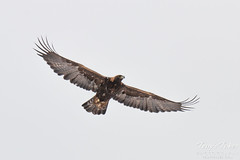