Driving home from work on a chilly, late winter afternoon, I was on the lookout for Bald Eagles as usual but was particularly taken with a stunning display of iridescent clouds to the west.

As I crossed a bridge over the South Platte River north of Denver , I saw an eagle was sitting in a common roosting spot.  Very quickly I pulled off the side of the road and whipped out my camera.  My jaw dropped at the scene that was unfolding.

Multiple layers of rainbow colored clouds spread across much of the horizon behind the raptor.  It was an impressive, once in a lifetime scene that I was ecstatic to be able to capture.

Minimal editing of these images was done, mainly just in the form of bringing up the shadows and darkening the highlights a bit.

Cloud iridescence is caused by clouds (usually cirrus) that have small water droplets or ice crystals in them causing the light to be diffracted, or spread out. The phenomena is much like the rainbow colors seen with oil in water.

Taken February 12, 2014.  I was able to get a number of pictures of this unique event. Scroll down to view more. 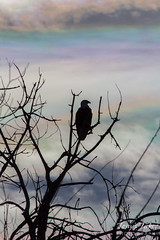 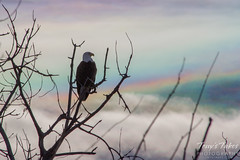 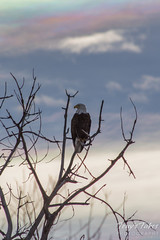 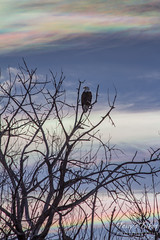 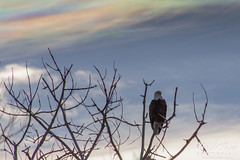 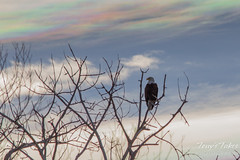 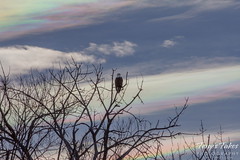 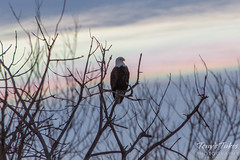